Data Viz - A Journey Through Time and Space!

This year, NASA marked the 60th anniversary of its establishment as a U.S. government agency. Let’s see what we can uncover about the past 60 years through data visualization!

This month, the dataset contained NASA astronaut data, both current and former, along with stats about them for things such as: _- gender _- number of flights flown _- selection year into the program _- time spent in space _- military or civilian background

I loaded the CSV into a Jupyter Notebook, and did an initial inspection of the data types, which returned the following:

My first impressions are that there will at least have to be some clean up to the column names to make them functional by trimming extra spaces and shorting some of the names.

After that, what I expected to be numeric values for Number of Flights and Hours in Space needed to be converted to integers from string and account for some of the null values present.

Finally, I cleaned up categorial columns I wanted to use by removing extra spaces and filling in null values based on research to make the data useful for grouping and finding trends.

Additionally, I used the year from Date of birth along with Selection Year to make a new data column called Age, which refers to the age of the Astronaut at the time of their selection into the program.

For me, the best part of data visualization is about what you can uncover from the data by visualizing groups and allowing the scale to tell a story. I wanted not only to create some visually appealing graphs but see what we can learn from the data outside of the table format! 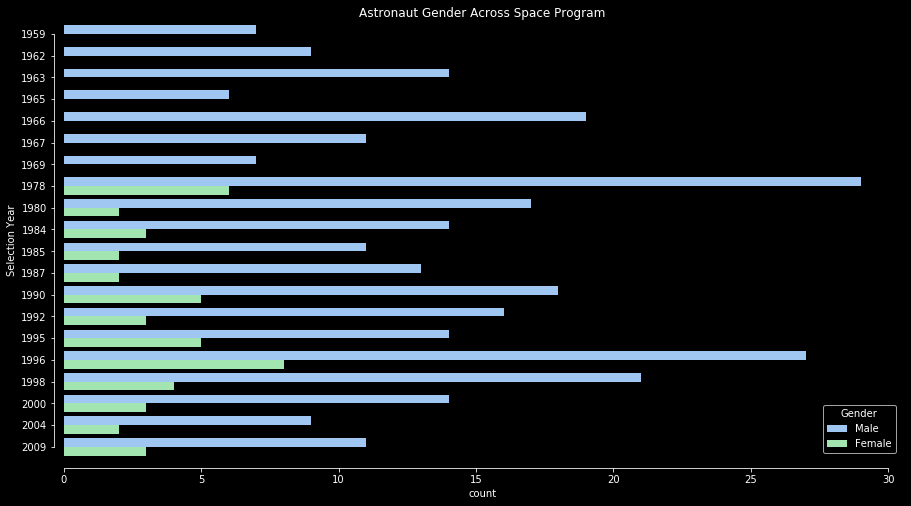 I really wanted the chart above to be a stacked bar chart, but that requires creating a total column in Seaborn and then stacking two plots on top of each other to create this layout. Rather than battle formatting on this task, I wanted to see if Chartify would be better at producing the graph I wanted.

And it was successful! 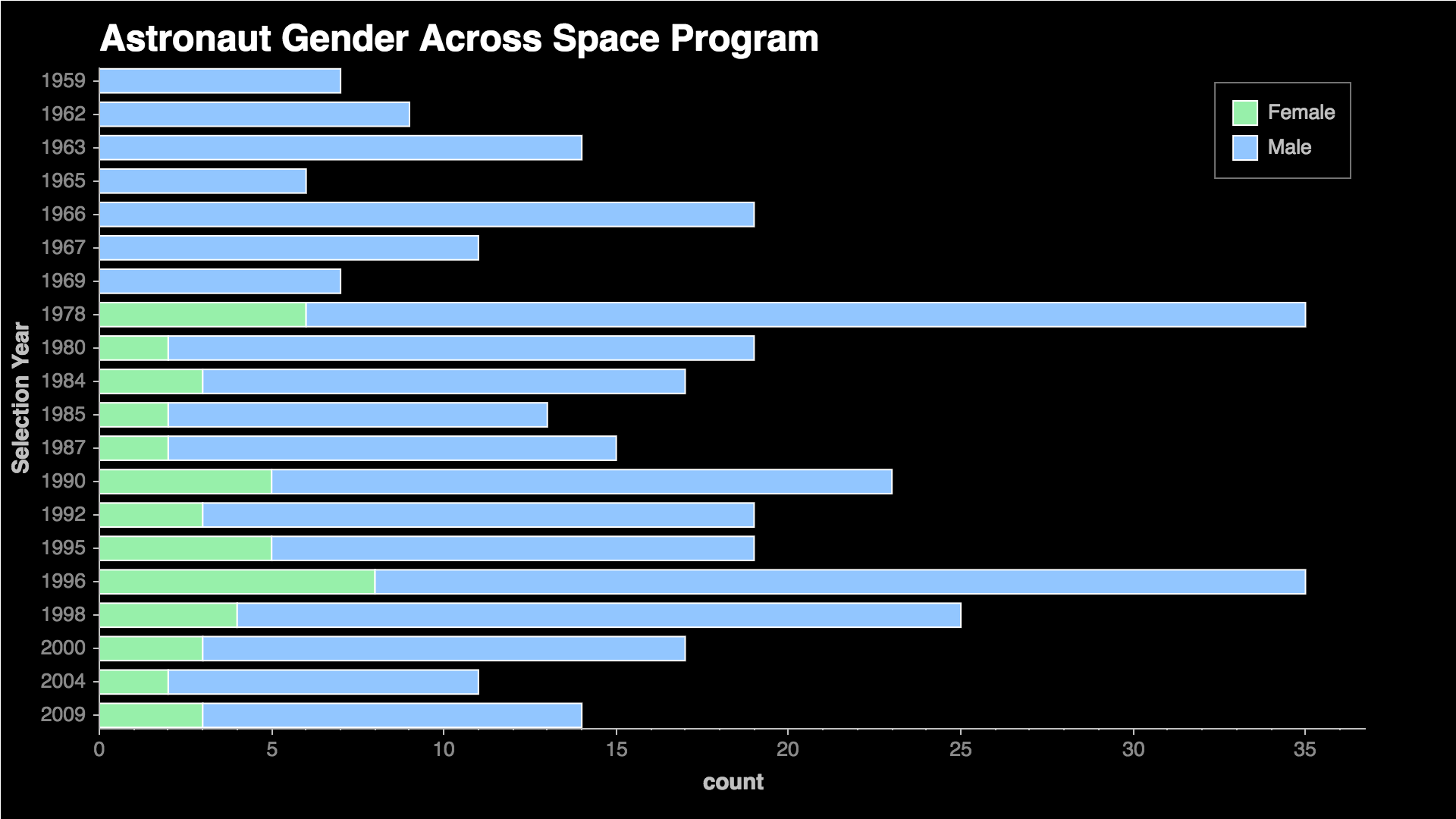 There was one additional step to make a dataframe that was the count totals I needed rather than allowing the platform to build it on its own. Here is a snapshot of the code that made the above chart:

There were several additional lines of code needed to recreate the format to match what I wanted that graphs to look like. In the end, I decided to stick with Seaborn for this project, but Chartify can be useful for my future projects when I would like to stick with there built-in styles.

After creating the Age feature, I wanted to see how best to include this into other groupings to reveal some fascinating insight into the data. 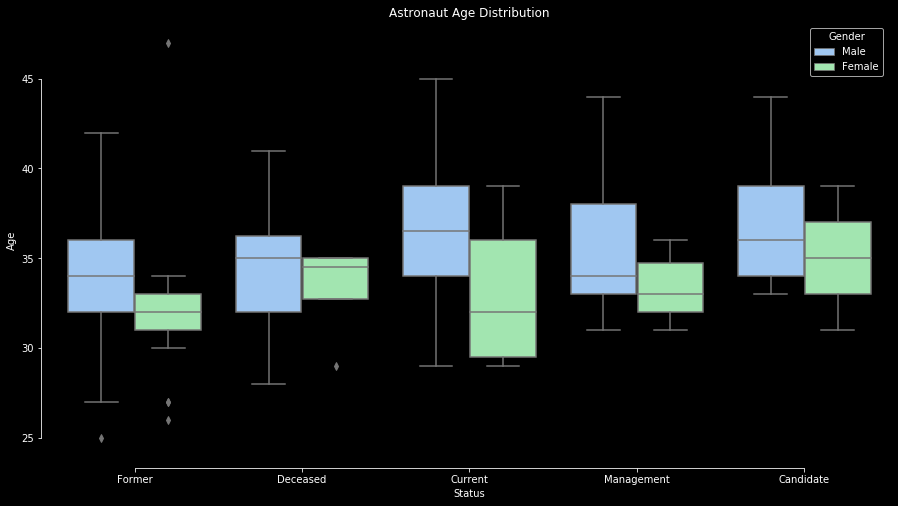 From this plot, I found the outlier in the ‘Former, Female’ grouping of particular interest. WHO IS THE OUTLIER THAT BECAME AN ASTRONAUT AT 47?!

After exploring the data using Pandas, I was able to locate the astronaut I was interested in discovering!

Since Barbara Morgan was the oldest to join the astronaut program, I wanted to know her journey in becoming an astronaut at an older age. So I read into Barbara’s Wikipedia page and was not disappointed in learning her journey!

Additionally, I wanted to see how the age of the selection group has changed over time, if at all. A ridge plot should be a useful tool in doing so. 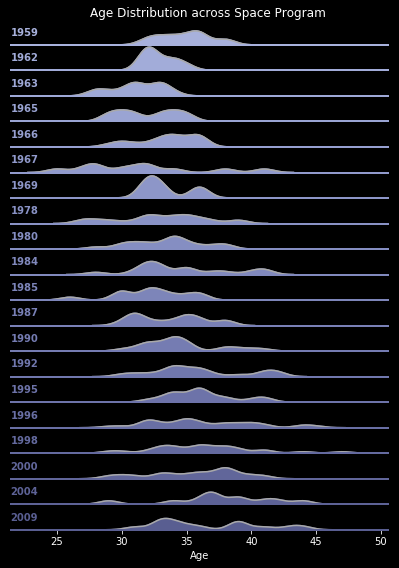 Next, let’s explore what the path to becoming an astronaut looks like. To do so, I used a Sankey diagram to show this process. Those 13 women service members are:

Now for the most exciting category, how long each astronaut has spent in space. Let’s see what we can find.

Time in Space By Selection Year 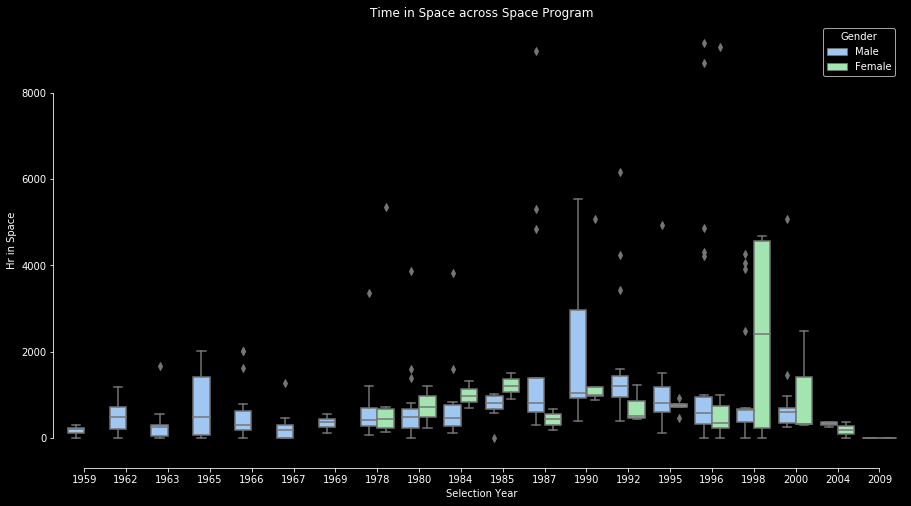 As expected, the early years of the space program had astronauts with relatively shorter times spent in space, but this was marked by the Apollo Program and missions to the Moon rather than orbits associated with the Space Station program that was later to come.

I was also interested in the astronaut from who appears to have been an early pioneer in length of time spent in space from the 1978 Selection Group. Here is what I found:

Time in Space By Service

I was also curious to see if military service members or civilians spent more time in space. My initial assumption is that military background would be more dominant in this area due to prior experience and also being the slight majority in astronaut background. 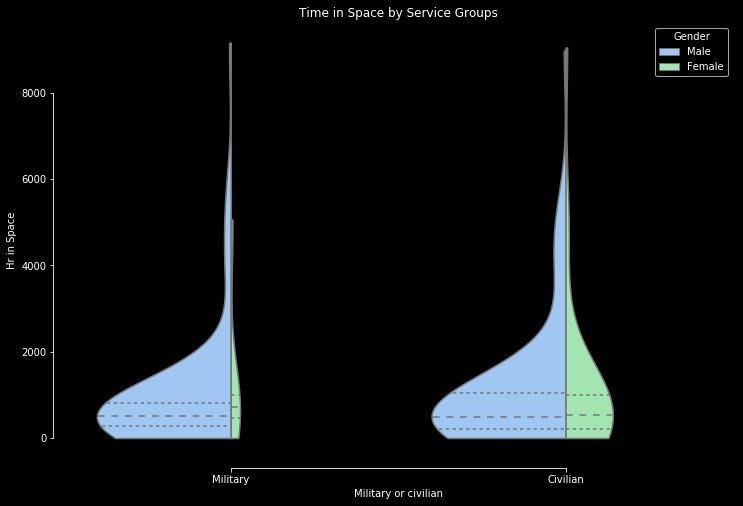 Interestingly, more civilians appear to have spent longer time periods in space than service members, which I believe can be attributed to the nature of most civilian roles being based on scientific exploration during flight missions.

Comparison of Time in Space for all astronauts

Finally, I couldn’t resist but include an interactive chart that was visually appealing and included the data for anyone to explore. I chose to use a sunburst chart sorted by year and time in space to make something that can effectively use the space but also maintain the space theme.

The sunburst chart only contains astronauts that spent time in space. 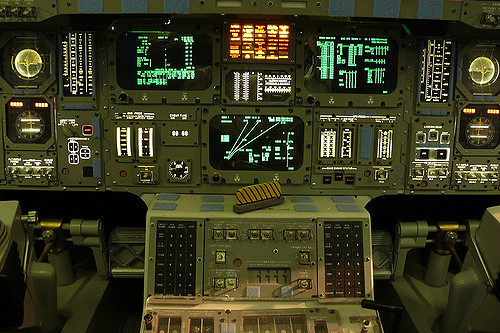 Charts and grids on control panels have similar themes across both real and virtual environments. The gif below is the gameplay from the video game classic Wing Commander. This is what I hoped to mimic when I wanted to make interactive charts!

My default charting is usually Seaborn when doing quick plots with styling, but I also wanted to try out the new Chartify library released by Spotify to test its functionality.

For interactive charts, I used Plotly as well as Bokeh since it was the library where I could most easily accomplish the sunburst effect I wanted to create.

I was impressed with the amount of achievements that women astronauts have accomplished over the years but personally did not know of many others than Sally Ride. I was happy to learn of such notable astronauts as Shannon Lucid and Judith Resnik and their amazing stories.

Thanks for checking out my post! Check out the Github repo here for code behind the charts!

Previous What is Kanye Thinking?
Next Data Viz - Texas Justice In...