Campaigns have radically changed. As demonstrated in 2016, viral content and online message can have a powerful influence over the state of the race. Party platforms have less influence now than what is being discussed across the internet. The challenge for modern campaigns is to be able to effectively stay on top and get the message they want to reach voters.

With the midterm election fast approaching, it is essential for campaigns to know where they stand in the race. We know that there are many social media platforms out there and much of their content can be traced back to Reddit. With the speed at which viral content spreads, it is vital for campaigns to know their message is working or if your opponent’s attack ads are negatively affecting your campaign.

With the high stakes of today’s politic discourse, what can we learn by using machine learning to analyze how campaigns are being discussed? We will take the high profile campaign between Beto O’Rourke (D) and Ted Cruz (R) as our race to review in depth.

To create the data to use for the project, I combined the post title with the post content to maximize the text content used in the model. This was necessary since many reddit posts related to both campaigns were just links to other pages and did not contain much discussion inside the post.

Additionally, it became very apparent how many more posts were occuring for the Beto campaign in the Reddit realm than the Cruz campaign. Since Reddit’s API is limited to the last 1000 posts, the timelines were very different depending on how active each campaign’s subreddit had been over time.

Each of the total posts per campaign were the same in the following chart, but show a very different timeline and frequency in posts over the last few months. 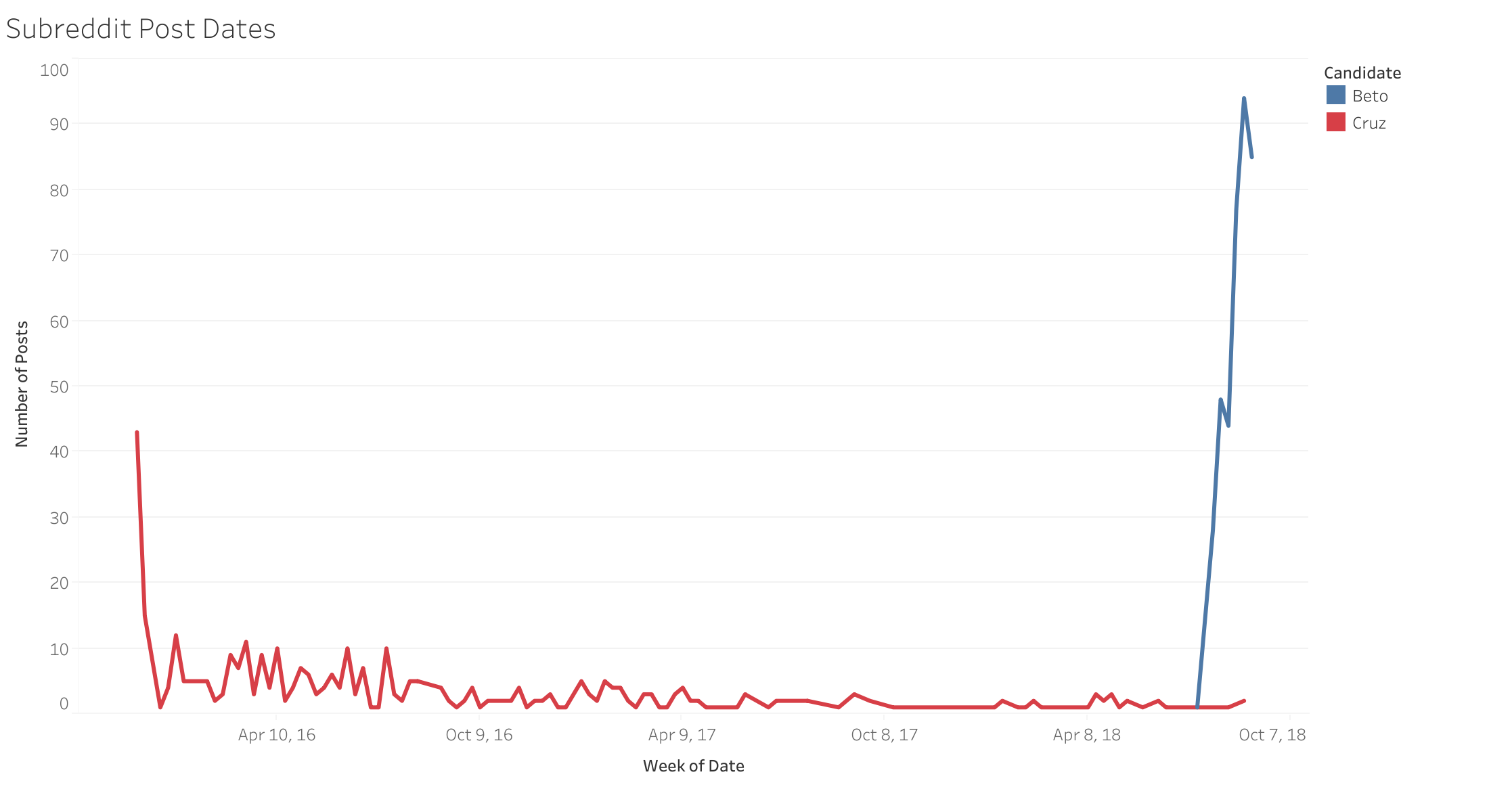 After using TF-IDF to vectorize the text data, I applied multiple classifcation model types into a pipeline and optimized each with GridSearch on my training data to predict which subreddit the post came from. Exploring a variety of models initially helped give direction on which was able to perform relatively effectively and within the scope of the project.

Once the model was finished, predictions were made on the test set and produced the following confusion matrix:

The model was able to successfully conduct binary classification with an accuracy score of 0.94. This seemed like good news but also too good to be true, so I explored what could be causing this high of an accuracy score.

During review of the coefficients, it was clear that the names of each candidate was the overwhelming influence on the model.

To further explore how each candidate name affected the accuracy of the overall model, I experimented with adding them to the list of stop words that the vectorizer ignored. I was able to produce almost the same accuracy by removing Ted Cruz from the corpus as I was able to do fine tuning the hyperparameters for models such as Support Vector Machines and GradientBoost.

The main reason for this to occur based on these findings was that posts from the Beto subreddit included more references to Ted Cruz and once removed, was able to seperate Beto posts just as effectively.

What this ultimately comes down to is the model demonstrates the need to look at our results from a different perspective based on our data and how the accuracy paradox can come into play. The accuracy paradox states that a model wiht a given level of accuracy may have greater predictive power than models with higher accuracy. So while we are performing at a high accuracy, the best model may not be the one with highest accuracy since what allows us to generate a high score may not be what we really need in the end to find our true positive and negative predictions.

Penalized model: Bias the model towards the minority class.

I wanted to understand the state of a third subreddit using what was trained to the model and if I could get the pulse of the Texas reddit. I used the same function I built earlier and isolated any post referencing a candidate or had a ‘politics’ flag.

Overall, a majority of post were predicted to be discussing topics indicating higher discussion relating to Beto over Cruz.

Binary predictor can be effective in a first stage classification but can miss subtle things like sarcasm and word proximity. In the case of the subreddit posts from r/texas, posts with the highest probability as pro-Cruz were some of the strongest insults against him. Noticing and taking into account what your data actually contains is imperative to your ability to interpret the results.

Be careful for the Accuracy Paradox

Balance model complexity to your needs

To check out more about the project, visit the Github repo here.